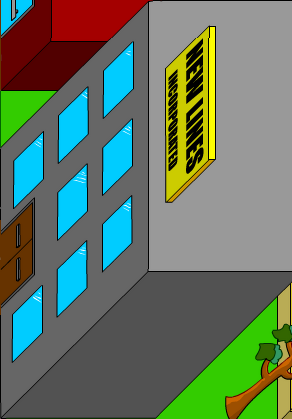 New Lines Incorporated, also known as New Lines Inc. is an office building that is in both the 2D World (Stick RPG Complete) and 2,5D World (Stick RPG 2). It exists as a means of profit for the player, and provides the player with a job within the company that the player can work at to earn a set amount of money by performing menial tasks. Promotions are available through increased intelligence, which allows for a higher pay wage.

New Lines Incorporated is located on the corner between the Bank, and U of S.

Working at New Lines Incorporated is the most common and high-paying job available to a starting player, given that they start with an intelligence level of at least 20.

Each shift, no matter which position, requires six hours out of the day of the main character. Normally, the player starts at eight o'clock, leaving the possibility of only two shifts a day. However, if the player purchases both the CD Alarm Clock from the Pawn Shop, as well as a stock of Caffiene Pills from the Convenience Store, 24-hour days where the main character wakes up at midnight (thus not really sleeping at all) are possible. With this combination, the player is able to work four times a day, achieving a total possible of $2400 a day as a CEO.

In the second game, the building definitely doesn't stand out as much as in the first game. It is where the Corporate Zombie job is held, along with all of its promotions. It pays moderately well, and the building is located on the first island of the game; the back door is the only one in which you can enter.

The ranks at New Lines Inc. are:

Community content is available under CC-BY-SA unless otherwise noted.
Advertisement